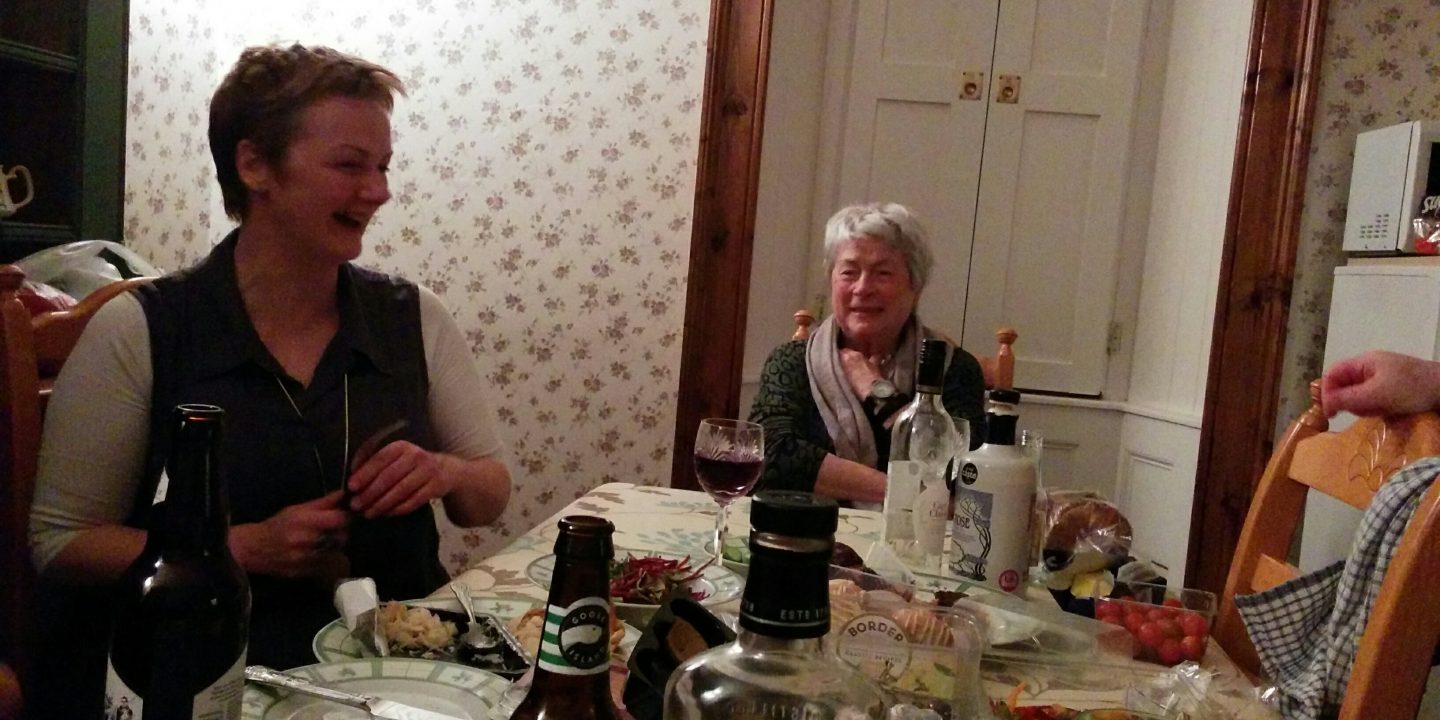 We were honoured to have world renowned voice teacher Kristin Linklater come to see A Brief History of Evil on Hoy. She wrote a review of the piece for The Orcadian. Thank you, Kristin, for your kind words about the show.

‘A mentally electrifying piece of theatre’

A Brief History of Evil,

The Company of Wolves brought its touring performance of A Brief History of Evil to Hoy.

The titles alone of the company and the production could raise the hair on the back of one’s neck even before performance begins, and the performance was a mental thriller.

This is by no means a conventional theatre event offering a beginning, a middle and a comforting end and there is no story.

It disobeys most of Aristotle’s rules for good drama such as plot and language and development of character, but it oddly obeys another powerful element of classical theatre which is “catharsis”.

Catharsis is usually defined as “a purifying or figurative cleansing of the emotions, especially through pity and fear” but I like another definition which says that catharsis was the same word as was used in ancient Greece for cleaning kitchens: “shedding light into dark corners.”

We all know what that’s like – and that’s just what The Company of Wolves is doing with A Brief History of Evil.

It sheds light into the dark and sometimes dirty kitchen of our minds. The actors, Ewan Downie and Jonathan Peck, both have strong backgrounds in physical theatre training.

For several years Downie was a member of the Polish theatre company, The Song of the Goat, whose physical and vocal work was spawned from Jerzy Grotowski’s revolutionary Theatre Lab; Peck trained with Philippe Gaulier whose physical clown work has had a strong influence on the experimental physical theatre movement in the UK and other parts of Europe.

Downie and Peck have the kind of symbiotic stage relationship that can only grow out of years of working and creating together.

They have devised this piece of theatre from the co-creative energies of their bodies, minds and lives. Their bodies are supple, strong, expressive, and they never exhibit their technique.

Their bodies reveal the intricacies of their minds. And their minds are exploring the hidden litanies of life today.

“I want to be a better person”

Are these phrases spoken to another person or repeated in the dark recesses of one’s own mind?

Are these two people on the stage really two people or the two voices that compete endlessly inside one’s own head?

We get echoes of self-help jargon, of how to succeed in business, of self-flagellation and self-aggrandisement and we, the audience (I can speak not only for myself but for several other witnesses) were brought to a level of exquisite discomforture.

Should we have applauded when the actors built to a climax of success with familiar gestures of supreme accomplishment?

They seemed to beg for our hands. But – but – there was something wrong here, and we, embarrassed, withheld our endorsement. Time and again we were brought to a level of enlivening discomfort as fragments of the actors’ minds impelled their bodies into very beautiful and stunningly subtle interchanges.

They are trained to the point where they can allow the shift of psychological impulse to be revealed through a twist, a thrust, a letting-go of some small or larger part of the body that reflects the impulse and allows it to refract into ours.

Through their intimate physical interactions we recognise the falsities of self-betterment, the dangers, the complexities and the competitions in our relationships with ourselves and with others.

The most uncomfortable and painful moment came late on in the hour-long show when the actors seemed to have stripped away all layers of behaviour and talked very simply to the audience saying “Look – now we are being really real. This is not acting.

“We’re talking to you from ourselves and we want you to know who we are.”

Oh – how hard that was! Because we had by then been conditioned to recognise the layers of self-deception that everyone one relies on for survival.

We couldn’t accept what may well have been the truth. How did the actors bring us to this questioning? I really don’t know, but there were contributing repetitions of actions marking the progress of the evening.

A kind of ironic pat-a-cake exchange, an approach of two mouths that exchanged breath and almost promised a meeting of minds until, near the end, the mouths actually met, suggested union, and immediately broke apart yet again into antagonistic separation.

There was the action of a mesmerizing building and re-building of solid, un-special blocks on the stage – representing perhaps the necessary boredom of our everyday existence or perhaps the constant imperfect rebuilding of our mental defences.

And there was an intermittent surround-scape of voices suggesting the presence of an audience who might at any moment tune into the performance of our lives.

The audience that we were last Friday night was left with a multiplicity of different reactions and much to talk about as we shared our opinions over a drink in the small theatre bar afterwards. My over-riding reaction was of gratitude to the Gable End for giving us the option of experiencing some out-of-the-ordinary theatre experiences.

The theatre itself is very pretty, very charming, very welcoming and very unusual in the Orkney cultural landscape.